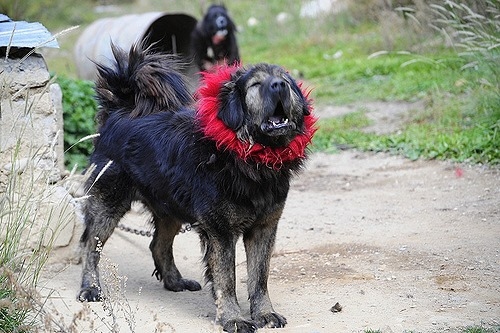 One of the Tibetan traditions, which has struck the imagination of Western people, is the use of those red voluminous dog collars, you can observe in a lot of photos which have been taken in Tibetan mastiff native lands.

These dog collars are called in Tibetan language kekhor or ske’kor (the second name is the union between the words “ske” which means neck, and “kor” which means circle). They are made up of dyed Yak fiber wool, which is produced from the coat hair of Yaks. They are generally red, but there also collars which come up in yellow, black, mixed colors and some ancient types show Yak caudal vertebras which reinforce them.

Their function is both protective and aesthetics/esoteric. The used colors have a remarkable importance in the local culture, and the fluttering of the fur when the dog moves, makes his head appear framed into a circle of flames. This is such an impressive effect to the observer.

The use of these collars is typical in the whole area of Tibetan culture influence. Indeed, you can see dogs wearing their kekhors in the great Erdene Zuu temple frescos, whom Abtai Sain Khan had it built in 1585 close by the ruins of the ancient town of Karakorum, as you can see in a famous photo which has been taken in Nepal and which was published in Emil Hauch’s book “Die Rassen des Hundes” (1965). Out of Tibet their use has been gradually lost, but it is interesting to observe how in Mongolia there is a recent habit to make dogs wear some collars, which are clearly inspired by traditional ones. These dog collars are made of red fabric triangles, but their function is entirely aesthetics, because they do not provide any protective function to dog’s neck.

There are different typologies of kekhor, higher or lower, short-haired or long-haired, thick or thin. Their appearance depends on traditions and on strictly local taste and habits.

It is interesting to observe, tip metal collars similar to Western ones are not so common. Dr Helmut Epstein provided the unique historical proof, when he observed one of these in Mongolia. Dog metal collars, which are realized with “V” engravings in order to lift the tips and get sharp scales, are widely used in Uttarakhand and bordering areas and in the Nort-Eastern India.

Similar collars to those wore even by short-haired mastiffs, are used for hunting dogs (sha-khyi), in order to protect their neck. Whereas, dyed collars in Yak fur or fabric are worn by any kind of dog, because they are a good omen.

Although collars have a valuable importance in the Tibetan culture, their presence or absence does not necessarily express a dog value or a dog danger level, as it has been said in some fantastic Western written tales.